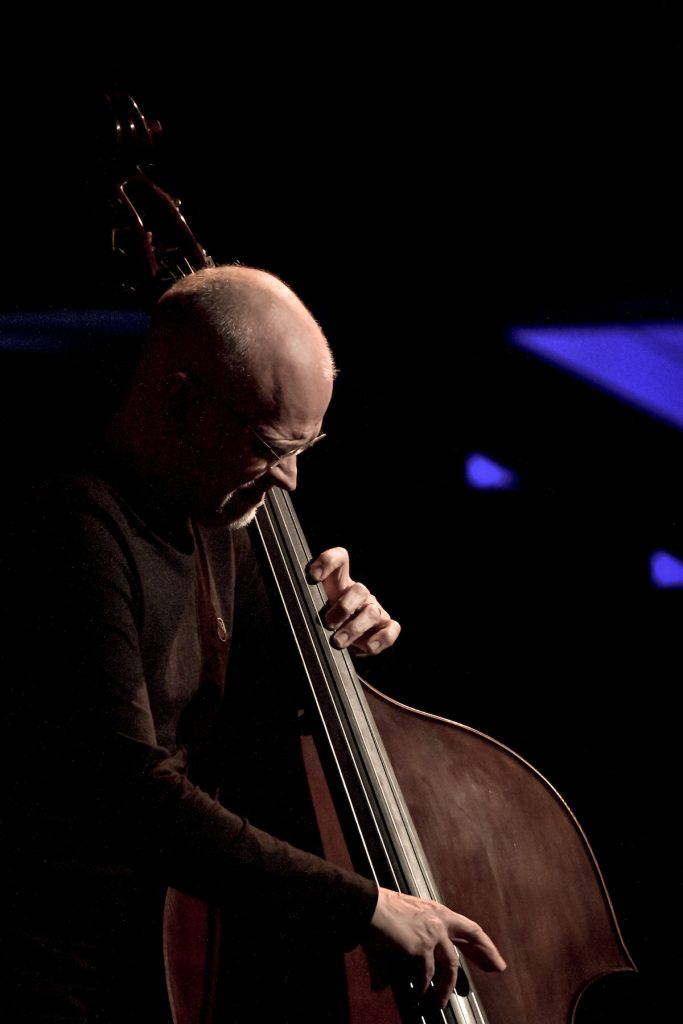 Lars Danielsson, born in Gothenburg in 1958, had been studying classical cello at the conservatory in his home town of Gothenburg. Fortunately, that study of the cello is not something he has chosen to shrug off, he has integrated it into what he does now. Not just in the sense that he always includes the cello in his repertoire, but also that his bass-playing unmistakably has a slightly more melodious, floating and lyrical ring to it than that of many of his fellow bass players.

Lars Danielsson, born in Gothenburg in 1958, had been studying classical cello at the conservatory in his home town of Gothenburg. Fortunately, that study of the cello is not something he has chosen to shrug off, he has integrated it into what he does now. Not just in the sense that he always includes the cello in his repertoire, but also that his bass-playing unmistakably has a slightly more melodious, floating and lyrical ring to it than that of many of his fellow bass players.

These were the special qualities which soon placed him in very high demand internationally as a sideman. As early as the 1980s, he had worked not only with local and European greats such as Lars Jansson, Hans Ulrik, Carsten Dahl, Nils Landgren, Christopher Dell, Johannes Enders and Trilok Gurtu (in whose group he remained a member for some time), but also with luminaries of the American scene such as saxophonists Rick Margitza and Charles Lloyd, the Brecker Brothers, drummers Terri Lyne Carrington , Jack DeJohnette and Billy Hart or guitarists John Scofield, Mike Stern and John Abercrombie. But Danielsson has never been content with just an accompanying role. He has always been a creative composer as well and is one of a relatively small group of bassists who has also emerged as a significant bandleader.

The ensemble which gave Danielsson the best outlet in his quest for musical self-expression for almost 20 years was his own all-star quartet with American saxophonist David Liebman (who used to play with Miles Davis), Swedish pianist Bobo Stenson and Norwegian drummer Jon Christensen. Stenson and Christensen are both pioneers of the “Nordic Sound”, the combination of jazz with the Scandinavian ethos, and both are also long-standing artists on the ECM label. Four albums by the quartet under Danielsson‘s name and six more albums with guests consolidated Danielsson’s reputation as one of Europe’s leading jazz musicians, receiving not just enthusiastic reviews but also many awards. Furthermore, this band laid the foundation for his work as a composer, arranger and producer, which has developed in a major way since then. Danielsson has worked in these capacities with the Danish Radio Concert Orchestra, the Gothenburg Symphony Orchestra, the NDR Big Band, the St. Petersburg Symphony Orchestra and the JazzBaltica Ensemble, the drummer Jonas Johanssen and the singers Viktoria Tolstoy and Cæcilie Norby – the latter being his wife, whom he regularly accompanies.

In the past few years, Lars Danielsson has also expanded his musical frame of reference and stylistic range of his own projects. His ACT debut, “Libera Me” from 2004, proved him to be a master of orchestral jazz. “Mélange Bleu”, two years later, sprung a surprise with a modern, carefully applied electronic framework for his expansive and sonically adventurous and rich compositions. With “Pasodoble” in 2007, he created a breathtaking manifesto of beautiful sound in a duet with the Polish pianist Leszek Możdżer, which occupied the terrain between classical music and jazz, and received superb reviews. “Tarantella” continued the productive collaboration with Możdżer in 2009, but transferred the basic musical idea into the context of a chamber jazz ensemble. All these albums (as well as those that followed) went either gold or platinum, and the orchestral project “Blauklang”, co-initiated by him and conducted by Vince Mendoza, was nominated for a Grammy.

To some extent, Danielsson really found the quintessence of his diverse forms of expression in 2012 – and also the right name for it: “Liberetto”. His newly-created word “describes a certain mood in which I want to develop my music,“ he says. “It follows on from my earlier albums – purely linguistically as in the reference to classical music.” The album, itself entitled “Liberetto” with the Armenian star pianist Tigran, e.s.t. drummer Magnus Öström, British guitarist John Parricelli and trumpeter Arve Henriksen found a new balance between jazz, classical music, pop and European folk music and thus opened up a new dimension of how compositional processes and dramaturgy could be used in jazz. It was so successful that the project continues to this day: After “Liberetto II” in a very intimate duo with Tigran and “Liberetto III” in the tried and tested quartet, with the addition of a new and different hue in the form of French-Caribbean pianist, Grégory Privat, Danielsson performed a symphonic version of this concept and the compositions for it at the Leopolis Jazz Fest. There will also be a recording of this project in the near future.

Naturally, Danielsson also leaves plenty of room for other interesting projects: he participates in the unique concert series “Jazz at Berlin Philharmonic”, and he works in a duo with the Sardinian trumpeter Paolo Fresu, one of the most lyrical players anywhere. Their joint album “Summerwind” is the latest proof of what makes Danielsson quite so special: technical brilliance, a vivid and consistently fertile musical imagination, and an almost telepathic understanding with other musicians.