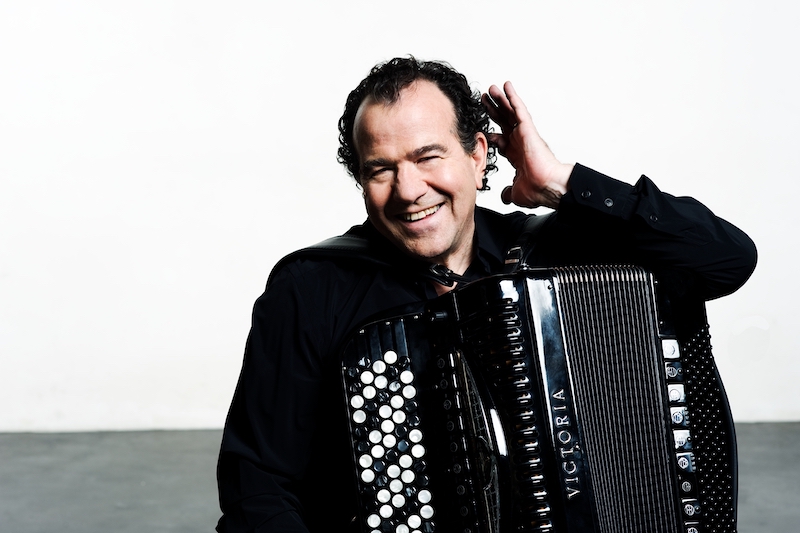 Accordion and bandoneon virtuoso, composer. Richard Galliano expresses himself in all musical fields, from classical to jazz.

He is the only accordion player currently recording for the prestigious classical music label “Deutsche Grammophon”.

Richard Galliano started studying piano and accordion at the age of 4 with his father Lucien Galliano, accordionist and teacher.

Accordion and bandoneon virtuoso, composer. Richard Galliano expresses himself in all musical fields, from classical to jazz.

He is the only accordion player currently recording for the prestigious classical music label “Deutsche Grammophon”.

Richard Galliano started studying piano and accordion at the age of 4 with his father Lucien Galliano, accordionist and teacher.

Particularly gifted and invested, he quickly entered the Nice Conservatory, directed at that time by organist Pierre Cochereau, and followed courses in harmony, counterpoint and trombone. He won first prize in 1969 with trombone.

He arrived in Paris in 1975 and met Claude Nougaro, becoming his friend, his accordionist and conductor until 1983. The author and composer had found each other. They got along beautifully. From this close collaboration many songs that are part of the heritage of French music, such as Allée des brouillards, Des voiliers,Vie Violence were born.

The second decisive meeting took place in 1980, with the Argentinean composer and bandoneonist Astor Piazzolla. Astor strongly encouraged Richard to create the French “New Musette”, as he himself had previously invented the Argentinean “New Tango”.

During his long and prolific career, Richard Galliano has recorded more than 50 albums under his name. He has also collaboratds with an impressive number of prestigious artists and musicians:

He has also collaborated with Nigel Kennedy for his classical repertoire and a large number of orchestras.

During his world tours, he has performed in the most prestigious theatres: the Lincoln Center in New York, the Victoria Hall in Geneva, the Accademia Santa Cécilia in Rome, the Théâtre des Champs-Élysées in Paris, the Théâtre Marinsky in Saint-Petersburg, as well as the New Philharmonies in Hamburg and Paris.

He won again in 1998 for his album Blow Up, recorded together with Michel Portal.

In 2009, he was appointed Officer in the Order of Arts and Letters.

In 2010, he received the “SACEM Prize for the Best Pedagogical Work for the Accordion Method”, written by him and his father Lucien Galliano, for Lemoine Publishing.

He recorded a Bach album with Deutsche Grammophon in 2010. This album broke classic sales records with more than 70,000 copies sold.

He was named Commander of the Order of Arts and Letters in 2011.

He won the “Victoire de la Musique Classique” in 2014 and also received the “Best Composer of the Year 2014 Award”.

Increasing his classical repertoire recording, he recorded a new album in 2016, this time dedicated to the work of Wolfgang Amadeus Mozart.

In 2016 he was promoted to Officer of the National Order of Merit by the French President, François Hollande.

In 2017 the album Aria was released, which was recorded as a duet in the Reformed Church of Bern (CH) with the organist Thierry Escaich at Jade-Universal. This album showcased the unexpected alliance between the organ and the accordion, made more sublime by the remarkable acoustics of the church and the quality of the organ.

A few weeks before his death, Michel Legrand entrusted Richard Galliano with the artistic direction of two “Tribute to Michel Legrand” concerts planned for April 2018 at the Grand Rex in Paris, together with Michel Portal, Ibrahim Maalouf and Natalie Dessay.

In May 4, 2018 Richard Galliano performed solo at the Tokyo International Forum.

The album The Tokyo Concert was released in spring 2019 under the Jade-Universal label. This is the album of his maturity,  greeted with great enthusiasm by the international press “Richard Galliano at summit of his art ”and by the ever larger audiences.

He gave more than 60 accordion recitals, notably as part of the Festival de Saint-Germain-des-des-Près, the Montreal Jazz Festival and the La Roque d’Anthéron Festival.

Following the death of his friend Michel Legrand, Richard Galliano wanted pay tribute to him with an album, Tribute to Michel Legrand,  recorded at the České Budějovice Philharmonic in Prague, in June 2019 with the Prague String Quintet. (Jade-Sony).

His next creation was an oratorio Les Chemins Noirs, based on the novel by René Frégni. The first performance took place at The Musical Scene of Boulogne Billancourt on January 30, 2020.

In 2020, Richard Galliano will celebrate his 50th anniversary in more than 15 countries.

The year will end on December 12, his 70th birthday and the anniversary of 50 years of his musical career, on stage at the Salle Gaveau in Paris.